Of the hernia types – Umbilical hernias are the second most common type of hernia after inguinal hernias. An umbilical hernia forms at the belly button, or the umbilicus. Just like other hernias, a hole forms in the muscles under the umbilicus and fat or intestines push through the hole.

The Basics of an Umbilical Hernia

The umbilicus is prone to muscle weakness since it’s where the greatest stress is placed on the muscles when we do anything physical. Umbilical hernias can be directly under the belly button, or sometimes slightly above or below it. They can look like a small marble under the skin, or as they get larger they can look like a golf ball and sometimes a tennis ball if left untreated. 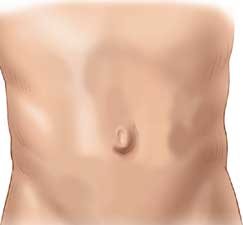 In young children (up to 5 years old) these hernia often go away on their own, but in adults these hernias never get better and usually get bigger over time. Women often get umbilical hernias during pregnancy, and these also often will go away after they deliver their baby. However, in some women, the hole in the muscle will remain after delivery. We often advise women wait 3-6 months to see if the hernia closes on it’s own.

Like most other hernias, pain at the belly button or navel is one of the most common symptoms. Also, due to the fat and intestines pushing through the hernia, a bulge can often form under the skin. This bulge can get bigger and smaller depending on what is in the hernia. Over time, if the hernia gets large enough, the intestine can get permanently trapped, which can lead to damage to the intestine, as well as other symptoms like nausea, vomiting, and constipation.

You can read more about symptoms on our ‘Hernia Symptoms‘ page.

How Are Umbilical Hernias Repaired?

Since no hernia can heal on its own, surgical repair is required. The option for most umbilical hernias is open surgery since the hole is usually very small. Laparoscopic surgery can be used for umbilical hernias but is usually reserved for recurrent or very large umbilical hernias. We perform a tension free mesh repair technique utilizing the latest mesh available. Mesh helps prevent recurrences after the hernia repair by strengthening the muscle around the hernia defect (read more on our ‘Truths About Hernia Mesh‘ page).

During open surgery, a small incision is made in the crease under the belly button. The belly button is lifted off of the underlying muscle and fat. The hole in the muscle is exposed and a mesh is placed through the hole. 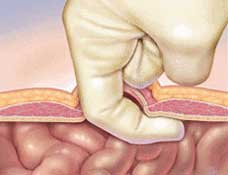 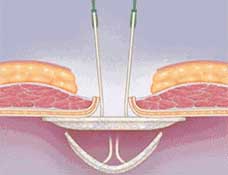 The mesh is then sutures (sewn) to the surrounding healthy muscle in several locations. Once the mesh is securely fastened to the muscle, the belly button is replaced down to the muscle or fat and the skin is sewn closed. 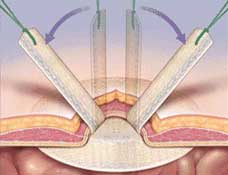 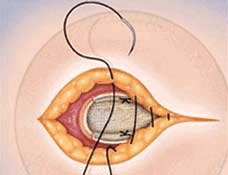 Some patients are concerned about scarring that occurs after a hernia surgery. This is especially true when repairing an umbilical hernia since the scar will be more visible than compared with groin hernia repairs. We have taken several pictures of umbilical hernia repair scars 6-12 months after the initial surgery so that patients can get an idea about how much (or how little!) scarring is usually seen.

Although umbilical hernias can often be repaired once and never recur, if they are repaired poorly, there is an increased risk of recurrence. These cases can quickly become challenging as the hole in the muscle gets larger and larger, making the surgeries more and more difficult.

In the case below, the patient had open surgery done without a mesh in 2013. Unfortunately that repair failed within 1-2 years and she had another surgery with mesh. Again, the hernia returned and she presented to our center for evaluation. In the images below, you can see the hole in the muscle, along with the prior mesh which had been placed in the wrong location at the time of her second surgery.

1. This is a review of a patient who had a recurrent umbilical hernia which failed 2 prior surgeries and had been operated on two previous times by an outside surgeon. The first surgery was done without mesh. After it recurred almost immediately, the same surgeon used a ‘large piece of mesh’ as was described by the patient and the operative report. Unfortunately shortly after this surgery, the bulge returned and the patient developed increasing pain. 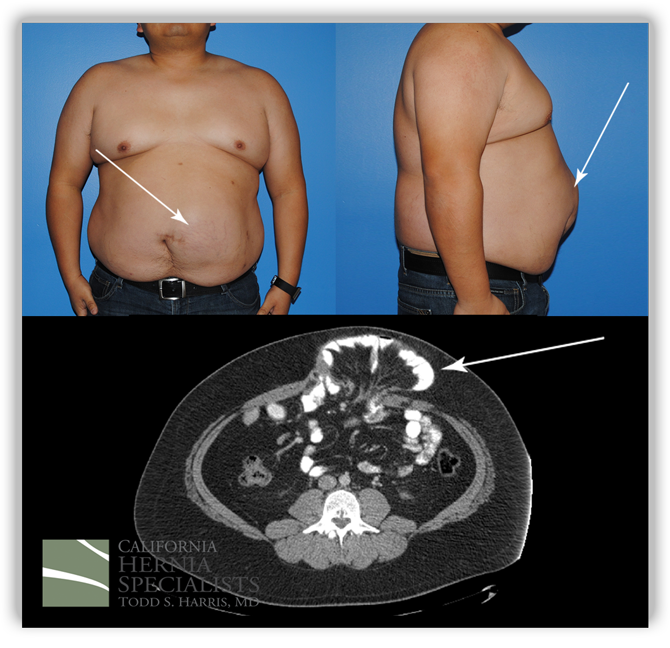 The patient presented to California Hernia Specialists for a second opinion before returning for a third surgery. The patient underwent a physical exam and a CT scan to evaluate the size of the hernia. A number of options were presented to the patient and ultimately it was decided to treat him with an open recurrent umbilical hernia repair. A ‘tummy tuck’ incision was used to help tighten and remove excess skin and the old scar. The old mesh had completely separated from the muscle and was stuck to the small intestines internally.

Careful removal of the mesh was required to free the intestine from the hernia. The muscle was closed and a new piece of advanced mesh was placed under the muscle to reinforce the repair. The images below are from before and after his hernia surgery. This image shows photos before his surgery along with the CT image corresponding to his hernia. The arrows point out the obvious hernia. 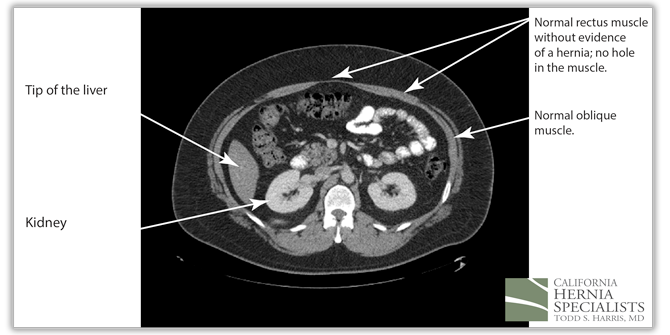 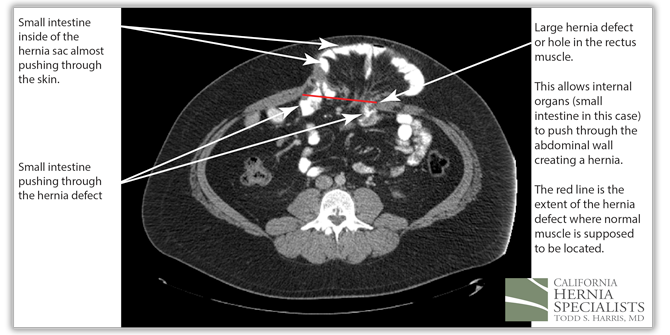 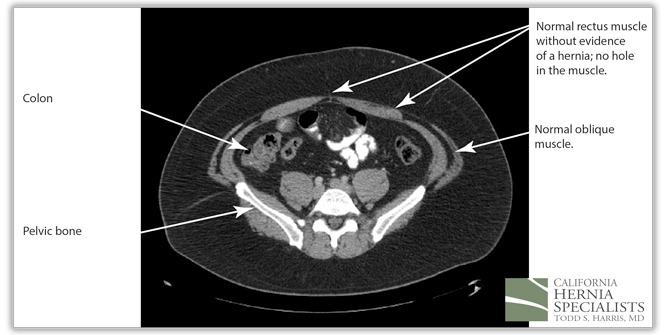 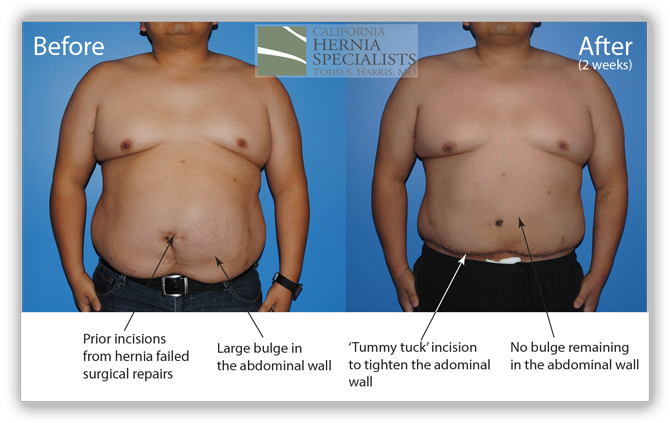 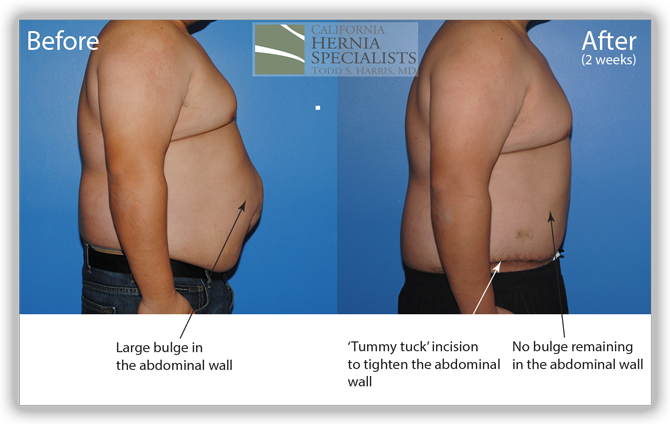 
2. Large umbilical hernias can be more difficult to repair when compared with much smaller ones. Although we don’t try and rush patients into surgery for small hernias that are causing no symptoms, we would strongly encourage patients to have their hernia repaired before it gets to this size. Below is a picture of a moderate to large umbilical hernia.

Click Here to see the surgical pictures from this case

For this large umbilical hernia, we chose to perform the surgery laparoscopically. We wanted to be sure to close the muscle during the repair and also to be able to place a mesh to help reinforce the muscle wall. Below are the pictures taken during the surgery.

Do You Track Your Patient Outcomes?

Dr. Harris has been honored with numerous awards for his medical practice in Hernias.

YOUTUBE With over 65 videos and 2 MILLION Views Visit Channel

Important Points To Consider When Choosing Your Hernia Surgeon:

Why Dr. Harris For Your Hernia Care?

Dr. Harris is the Medical Director of California Hernia Specialists and coordinates all clinical functions of the office and surgical center for hernia patients. He is dedicated to the diagnosis of, treatment for, and recovery from, all hernia types. Dr. Harris’ focus on hernia patients places a priority on getting them back to their full work and athletic life and is reflected in his published patient outcome data.

YouTube With over 65 videos and 2 MILLION Views
Visit Channel

Yelp Look what over 100 others are saying about Dr. Harris
Visit Site